People ask, “Where was God in the concentration camps? He was always just above, watching and wondering-where was man?” Victor Frankl

I picked up the book, Love and Hate, by Bill Halamandaris to read on the plane as I flew from Ottawa to St John’s. It’s the story of Henri Landwirth, a Jewish boy of 13 who was an inmate in Nazi Germany concentration camps from the age of 13-18. I’s a story of his survival, his immigrating to The United States and his success as a businessman and philanthropist. Link to Wikipedia bio

Henri Landrith’s story is a story of forgiveness.

This past week I was speaking to my friend, who is of German descent and we somehow got on the topic of war. He said that his was the only generation of his family that did not have to fight in a war. His father, who had been a medic in the German army during the second world, moved his family to Canada so that they would not have to fight in a conflict. His parents were Christian and his father would not talk about his war experiences.

The one common thread, they learned to forgive. The hatred that they had was replaced by love through forgiveness.

A few bible verses that speak about forgiveness.

Matthew 6: 9-15 9 “This, then, is how you should pray: “ ‘Our Father in heaven, hallowed be your name, 10 your kingdom come, your will be done, on earth as it is in heaven. 11 Give us today our daily bread. 12 And forgive us our debts, as we also have forgiven our debtors. 13 And lead us not into temptation,but deliver us from the evil one.’ 14 For if you forgive other people when they sin against you, your heavenly Father will also forgive you. 15 But if you do not forgive others their sins, your Father will not forgive your sins.

There is so much hatred in the world today, we need to exercise forgiveness..

Forgive and Be Blessed

Have you ever had moments or an extended period of time where you questioned the faithfulness of God? I have and this morning was one of them. There was no particular reason but for some reason I sensed that God was not faithful. What did I do? To be truthful, I wanted to do something other than spend time in prayer. I didn’t feel like praying and there were other things, that I felt were more important for me to do.  I struggled for a few moments and did what I knew was necessary. I knelt to pray. Even though I didn’t sense God’s faithfulness, I thanked Him for being faithful to me throughout the years.

I remembered burdensome and troublesome times in my life when God had been there with me. I knew He was and I thanked Him. A song of praise (I don’t sing out loud) burst forth within me and I knew he was there all along. I prayed for family and for friends, still being thankful.

That was about an hour ago and the following song is on my heart and mind.

Great is Thy Faithfulness

Does anybody have any positive info on this website/ http://www.whatthebibleteaches.com/wbt_120.htm

This is the first verse of a psalm of praise and thanksgiving to God for His numberless blessings to us.  We are often encouraged to sing songs such as ‘Count your blessings’, and to reflect on the multitude of blessings we receive from God.  We should never forget that all that we are and have we owe to our gracious and beneficent God.  But how often do we consider how we can and ought to ‘bless God’?  God is blessed when we acknowledge Him for Who He is and for what He has done for us.  When we live each day in an ‘attitude of gratitude’ God is blessed.  The psalmist goes on to say that we should bless God for all His benefits, for forgiving all our sins, and for healing our diseases.   We are urged to bless God with our soul, or from the very depth of our being.  God alone is worthy of our sacrifice of praise.  Hebrews 13:15 says that we should ‘offer the sacrifice of praise to God continually…giving thanks to His name.’

In today’s verse we notice that David is speaking to himself, and encouraging himself to offer praises and thanksgiving to God.  We too should endeavour to ensure that we bless the Lord with ‘all that is within’ us.  Only praise and thanksgiving, like ‘worship that is in spirit and in truth’, will be acceptable to God.  When we bless God, the blessing returns to us and we are strengthened and uplifted in our faith.

Are we truly thankful for all of God’s blessings?

Do we even believe that we can be a blessing to God?

The Canyon, Manuel’s River. Today, this was a “quiet spot” to talk to God. From Rocksnl.com 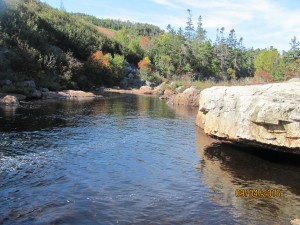 The Lord is my Shepherd; I shall not want.

He makes me lie down in green pastures: He leads me beside the still waters.

He restores my soul: He leads me in the paths of righteousness for His name’s sake.

Yea, though I walk through the valley of the shadow of death, I will fear no evil: for You are with me; Your rod and Your staff comfort me.

You prepare a table for me in the presence of my enemies: You anoint my head with oil; my cup runs over.

Surely goodness and mercy will follow me all the days of my life: and I will dwell in the house of the Lord for ever.

This is undoubtedly the most popular or well known of David’s psalms. It is a psalm which many look to for comfort in troubled times and assurance when they are facing life-threatening circumstances. It is also a psalm in which David speaks of God as the ‘Good Shepherd’,

Who is the loving and compassionate Provider and Protector of His flock. As an experienced shepherd David knew and diligently practiced his responsibility. How much more carefully will our Heavenly Father tend to His flock of believers?

How do you view God? Do you see Him as your personal Shepherd?

Are you comforted by His presence, protection and provision?